About our cover artist, Richard Powers 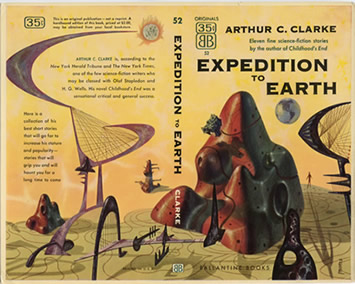 Pick up a science fiction paperback from the fifties or sixties, and take a good look at the cover. Do you see the usual flying saucers, monsters and cliched robots? Or do you see something undefinable: a setting that isn't quite a place... things that aren't quite objects... an eerie landscape that imparts an overpowering sense of being transported to another world, another time, another dimension? If you're having the latter experience, you are probably looking at the work of Richard Powers, one of the most startlingly imaginative American artists of the twentieth century.

Born in Chicago in 1921, Powers studied at the Chicago Art Institute before coming to New York in the 1940s. There, his work in both fine art and illustration began to attract considerable notice, and in the early fifties he was exhibited in the Metropolitan Museum of Art, The Corcoran Gallery, and the Museum of Modern Art (MOMA). Soon his illustration career took off, and he quickly became one of the most prolific, and distinctive, artists in the field of book cover illustration. No one knows the exact number, but Powers has been credited with at least 1200 book cover illustrations in all genres including children's books, novels, poetry, and non-fiction. But it is unquestionably his work in the science fiction field that gives the fullest expression to his powerful imagination. With this work he conjures alternate worlds, times, and dimensions... challenging us to see beyond the merely possible.

At ScienSonic Laboratories we share these same goals, and ascribe to a similar ethic of creativity, daring and imagination. For this reason we are very pleased and honored to have a contractual agreement with the Estate of Richard Powers, granting us the exclusive use of Powers' work for musical products. His astonishing visions - including some never-before-published works - will grace the covers of all ScienSonic musical releases. For us, this melding of our original music with the powerful images that have so long inspired it represents the culmination of a long-held dream. We are sorry Powers himself, who enjoyed listening to jazz and classical music while working (particularly contemporary composers such as Messiaen and Takemitsu), didn't live to see this collaboration. However we are heartened by an enthusiastic comment from his late son Tair, who liked to come out to our shows: "Dad would've loved your music!" We're humbly inclined to agree.

"It will be necessary for the reader-observer to accept the proposition that simulclone arrangements of constituent atoms exist and that random simultaneity of alternate universes is therefore a logical necessity..." Richard Powers